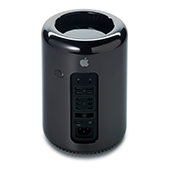 For years, Apple users have been holding on to nothing but online rumors concerning the release date of the new Mac Pro. Thankfully, Apple just confirmed a radical revamp of its high-end workstation. Although official information on the different models’ specs and features have not been confirmed, hints have been made about what could be in store for Mac Pro users.

The new Mac Pro is rumored to feature the next-generation Intel Xeon E5 processor. While the current models are configurable up to 3.5GHz for the six-core option, 3.0GHz for the eight-core option, and 2.7GHz for the 12-core option, the 2018 model could offer up to 14 or 18 cores per processor. What’s more, each model will likely come equipped with the Iris Pro Graphics P580, a highly powerful graphics processing unit (GPU) that will make heavy file renders a breeze.

However, there’s a small chance that Apple might abandon Intel chips altogether and move to AMD’s RYZEN 7 CPUs, which just set a new standard for high performing CPU processors.

The new Intel Xeon chips are rumored to have DDR4 memory controllers, and if that’s true, you can expect uber fast memory and low latency without having to worry about issues with overheating. Currently, the 15-inch MacBook Pro comes with 16GB RAM, so it’s likely that you could expect the same RAM with the updated entry-level model of the Mac Pro. And because Apple knows that users usually work with very large files, an option for 2TB flash storage could be possible.

Claims that the new Mac Pro might offer more Thunderbolt ports in the form of USB-3 are also up in the air. This makes sense as it brings Thunderbolt to USB-C at 40Gbps which ensures faster data transfer speed.

While a number of users wish Apple would offer PCI slots so they could add faster SSDs and more powerful video cards, looking back at the company’s previous releases, we don’t think you should get your hopes up just yet.

According to Apple, the triangular design of the Mac Pro’s thermal core was what limited them from offering updates to the machine. Because of that, we’ll probably see a completely new design in the 2018 model.

Apple just rolled out some minor updates to the current Mac Pro, including enhanced specs at lower price points. For the $2,999, you now get a 6-core Intel Xeon processor, dual AMD FirePro D500 GPUs, and 16GB of memory. And for $3,999, you now get an 8-core processor and dual D700 GPUs.

Having said that, you can expect slightly higher prices for the new Mac Pro than the current models, like with most new Apple releases.

The timeframe is 2018, but keep in mind that the present Mac Pro was unveiled at WWDC in 2013 and supply was so restrained that people didn’t get theirs until the following spring. Therefore it’s highly possible that the new model will be launched at WWDC 2018 during summer and won’t probably ship until the end of the year.

Stay tuned for more updates on the new Mac Pro. And if you’d like to know more about other Apple products, or learn how they can streamline your operations, give us a call and we’ll be happy to help.