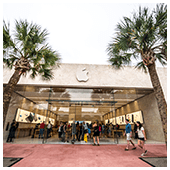 From new Apple Watches and Apple TVs to Mac and iPhone upgrades, Apple released a slew of products in 2017. But what’s in store for Apple fans in 2018? We’ll likely see iterative updates to existing product lines, but there’s a good chance we’ll get some totally unexpected announcements. Read on to find out the top Apple predictions for the year.

Three new iPhones
Just like every year, Apple will likely launch new iPhone models in September. Reports suggest there will be three iPhone models in 2018, and since Apple disrupted naming conventions by introducing iPhone X, it’s anyone’s guess what these models will be called.

However, experts predict the new iPhones will look like the current X model, but in sizes that match the 8, 8 Plus, and a supersized X model. They’ll all be equipped with faster hardware and a TrueDepth camera system that allows users to protect their phones with facial recognition.

HomePod
One device that’s certain to be released early in the year is the HomePod, a smart speaker in the same vein as Google Home and Amazon Echo. The Siri-powered speaker will likely feature automatic tuning, a fast A8 processor, and a six-microphone array to easily pick up commands. Other than playing music, HomePods will answer general questions and communicate with nearby smart devices.

Considering that Amazon and Google currently dominate the smart speaker market, Apple has its work cut out.

AirPods and wireless charging
There’s also talk of updated versions of AirPods, Apple’s wireless headphones. Rumors are far from substantiated, but experts are saying that the headphones may receive a design change and a case that can charge them wirelessly.

Wearables in healthcare
Those in healthcare predict Apple Watches will become a key piece of technology for the industry. More health-monitoring addons for Apple Watches like EKG readers are now FDA-approved, so we may see more doctors using them to give accurate diagnoses and treatments.

Augmented reality devices
Over the past few months, Apple has also expressed an interest in researching augmented reality (AR) technologies. In fact, leaks from manufacturing facilities indicate that Apple is working on smart glasses that overlay digital information in the physical world. Although it’s still unclear what they will be using it for or if Apple will follow through with their plans, there are plenty of business possibilities with AR.

For instance, it can be used to display line-of-sight prices and details about a product without having to check the price tag or ask a salesperson.

All in all, Apple users have much to be excited about, and if you want to be the first to find out when or if these products will be released in 2018, call us today. Our experts are always tuned into the latest Apple developments to give you an edge over the competition.