Will Android apps fit in laptops?

Will Android apps fit in laptops? 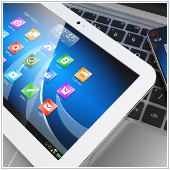 Yes, thanks to the new Chromebooks that will be launched in 2017. Users of the older versions of Chromebook don’t need to worry. Android apps will be repurposed for a bigger platform, and their old-model devices will get a taste of Android apps, too. With their entry into laptops, the world’s leading mobile operating system company looks poised to significantly expand their reach.

Chromebooks are marketed as no-frills computers that bank on their simplicity, functionality, and security. By giving Chromebooks access to Google Play, the search engine giant’s application store, users can access thousands of apps, including Skype, and manage Office files more seamlessly.

Certain types of Chromebooks are now able to install Android apps, but they are few. The good news is that 2017 Chromebook models from manufacturers such as Acer, Asus, Dell, H&P, and Lenovo are included in the list of Chromebooks that will work well with Android. If this move proves successful, other operating systems, especially Windows, may struggle to find a way to keep up.

Benefits of a Chromebook-Android combination

The most obvious benefit would be the increased number of options for Chromebook users. While Chromebooks have their own set of useful Google apps, having the capability to download Android apps is a substantial enhancement. For instance, users can now download and use Skype on their Chromebooks.

As Chromebooks welcome Google Play in its environment, they usher in more capacity without increasing the prices. Manufacturers such as Lenovo and Acer have Chromebook models that are competitively priced at just under $300.

A caveat for those looking to switch to Chromebook

If you’re thinking of switching to Chromebooks to get the most of Google apps, there are a few things you should remember. Since Android apps are designed for touchscreen devices, it might be a bit of a letdown for users of Chromebooks that have no such feature. Android will definitely adjust the specifications of Chromebook apps, but non-touchscreen Chromebook users won’t enjoy the same benefits that users of the new models have. Moreover, not all Android apps may be fully optimized for laptops (or Chromebooks), although the masterminds behind this merger will certainly make the necessary tweaks soon after the initial verdict comes in.

Is it time to buy a Chromebook?

If you’re a Google apps power user, Chromebooks are a good way to go. They’re sleek, functional, and adaptable. But don’t ditch your current laptops or Macs just yet. The integration is yet to be finalized, so the Android-powered Chromebooks may well be “unfinished products” at this stage.

There’s always a good reason to assess the computers your business uses. Your system’s speed, functionality, and security dwindle over time, and upgrades or replacements may be necessary. If you need dependable recommendations on computers that are best for your office, get in touch with us.